I’ve been thinking a lot about the right wing lately.  I can’t imagine why.

I wrote a short piece for Truthout detailing recent instances of the cops colluding with heavily armed right-wing knuckleheads, placing that collaboration in its historical context.  And then I wrote a review of Corey Robin’s The Enigma of Clarence Thomas, contemplating the significance of Thomas’ move from left-wing black nationalist to right-wing black nationalist.

This is more interesting, though:  Halloween weekend, I will be speaking on an online panel about incipient fascism in the United States.  The panel will follow reading of Tony Kushner’s play A Bright Room Called Day, put on by the Faultline Ensemble.  Act One is on October 30, and Act Two on November 1.  Discussions will follow each act, but I don’t know which day I will speak.  (So I guess you will just have to show up for both.)  More details soon!

Update:  My panel will be on November 1.  Tickets for both dates are available here: 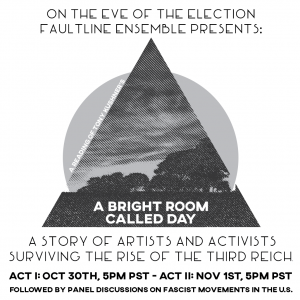